29/01/2019 – The OECD has released a new publication, Harmful Tax Practices – 2018 Progress Report on Preferential Regimes, which contains results demonstrating that jurisdictions have delivered on their commitment to comply with the standard on harmful tax practices, including ensuring that preferential regimes align taxation with substance.

The assessment of preferential tax regimes is part of ongoing implementation of Action 5 under the OECD/G20 BEPS Project. The assessments are conducted by the Forum on Harmful Tax Practices (FHTP), comprising of the more than 120 member jurisdictions of the Inclusive Framework. The latest assessment by the FHTP has yielded new conclusions on 57 regimes, including:

The FHTP has reviewed 255 regimes to date since the start of the BEPS Project, and the cumulative picture of the Action 5 regime review process is as follows: 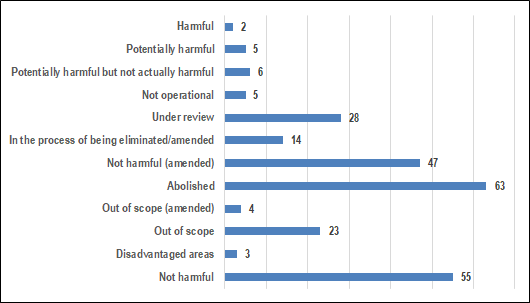 The report also delivers on the Action 5 mandate for considering revisions or additions to the FHTP framework, including updating the criteria and guidance used in assessing preferential regimes and the resumption of application of the substantial activities factor to no or only nominal tax jurisdictions. The report concludes in setting out the next key steps for the FHTP in continuing to address harmful tax practices.